2015 UPDATE: new wiki page for HHVM on CentOS7 with alternate instructions
—-
While building HHVM (HipHop Virtual Machine) for faster PHP on CentOS 6.x was pretty much a nightmare because almost none of third-party libraries are available from major repositories, the freshly released CentOS 7.0 solves most of this problem as it has far newer packages available from EPEL (because it has roots in more modern Fedora 19).

Note that unlike PHP/PHPNG, HHVM requires major resources to build. You may be used to making PHP in 15 minutes on a little old 256mb 1ghz box. You can forget that with HHVM which is a beast to compile. 1gb ram minimum and lots of cpu power required to keep it an hour or two (this is part of why PHP NG instead is so exciting because it will be so much easier to custom build).
END_OF_DOCUMENT_TOKEN_TO_BE_REPLACED

CentOS 7 to arrive in July with performance boost

Red Hat released RHEL 7 on June 10th which means the CentOS 7 community got to work, to prep their release based on the source. It is currently in “QA” release for review and will go to “GA” release (general availability) sometime in July.

The big news, at least for me, is performance improvements over CentOS 6.5
Red Hat claims 11% to 25% speed increase depending on workload:

Is that plausible from just an OS upgrade? Possibly, depending on better use of hardware and how much contention is going on. CentOS 7 will finally bring the linux 3.10 kernel to replace the 2.6.32 kernel in CentOS 6.5 – this means the elimination of the “big kernel lock” and better memory management.

7 will also bring the XFS filesystem as a default, alternative to EXT4. I am not sold on this change. I have seen a number of benchmarks that show EXT4 is faster in many cases, by a significant percent, over XFS (you can still use EXT4 of course). Apparently GRUB was also replaced with GRUB2 which is something I have to research and learn since it is critical for boot.

Want to read about all the new stuff for yourself?
Try the Red Hat release notes or save it for later in PDF format.

Initially there is no direct upgrade path for CentOS 6.5 to 7.
But they are discussing it and promise to explore after the GA release. 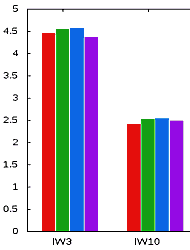 Google and others have published several whitepapers showing benchmarks where tuning tcp/ip on servers can really help web browsing performance.

One of these important tweaks is known as IW10 which improves the tcp/ip congestion window by reducing ACKs (initally sending 10 packets instead of only 3) and is enabled by increasing initcwnd and initrwnd.

Unfortunately those on CentOS (one of the most popular linux production distributions) were not able to take advantage of this – until this weekend when CentOS 6.4 was shipped.

CentOS 6.3 could change initcwnd but NOT initrwnd (RWIN) which requires a kernel > 2.6.33

Here’s how to take advantage of IW10 on CentOS 6.4